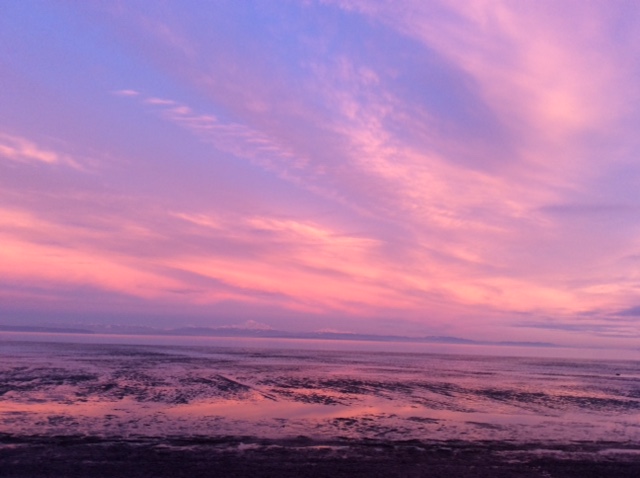 Believe it or not, lots has been happening at the Swedish House despite the silence from this blog.  I was a bit sidetracked trying to create a silicone mold from silicone caulking.

I thought it would help to make a frame to extrude the silicone into before pressing the fireplace I hoped to replicate, into the silicone. 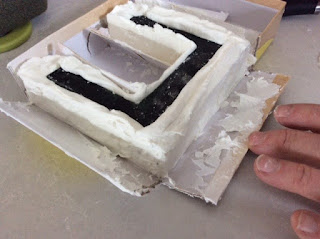 To make a long story short, my experiment was a failure. Perhaps I did not add enough powder to the silicone. I had done it successfully for a very small item so I thought I knew the correct "feel" of the substance. The mix never dried and believe me it was a very difficult and sticky mess to remove all of the silicone from the original even though I had been patient and waited a week before I attempted to remove it from the mold.

On to the backup plan to find a picture frame that I could use as a fireplace. I managed to do so for about $6.00 at a home decor store. 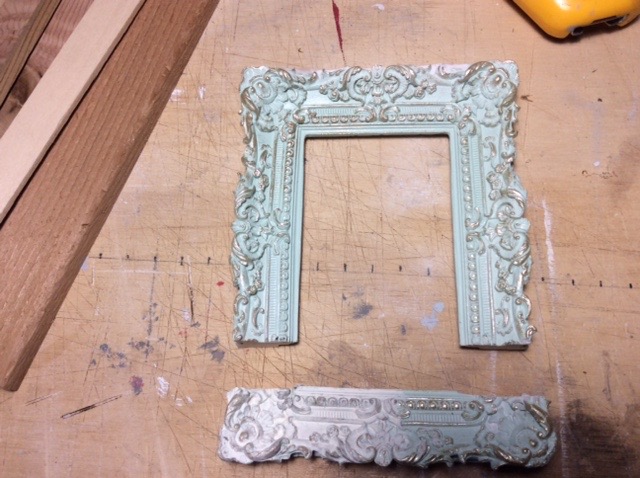 Below you see the frame attached to the backboard with a support for the faux marble mantle. 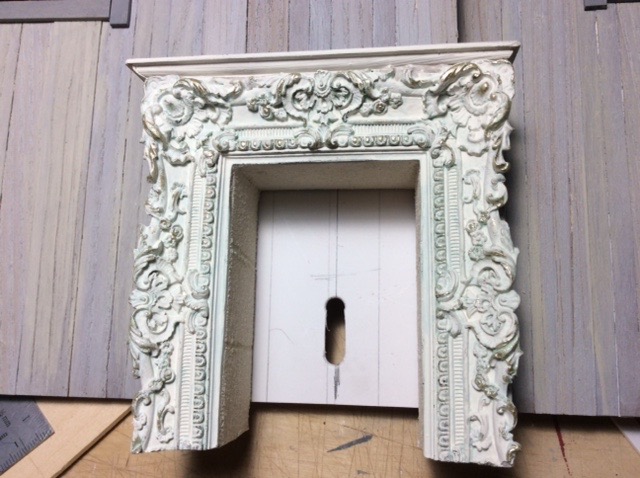 Almost there.  If you look at the previous post you will see the fireplace (unfinished) but in position.  It still needed a hearth and an exterior chimney. 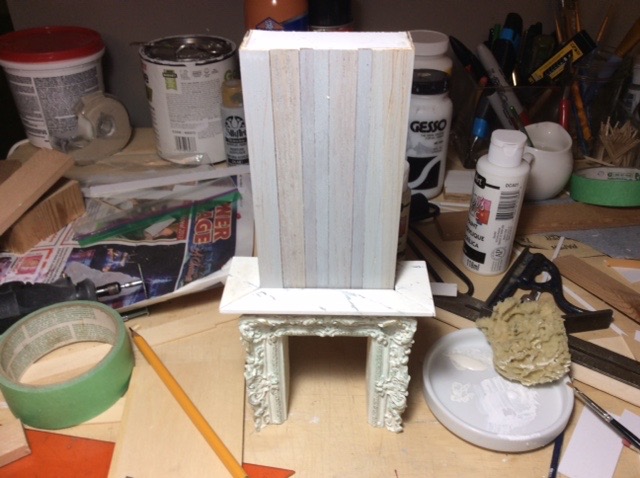 Egg-carton bricks rule! Well, yes, it is a bit tedious to paint, measure, cut, detail edges, place, glue, mortar, seal .... but it is worth while for the realistic results at minimum cost!

Planning below. First attempt at colour for the bricks. We were also thinking of some very fancy brickwork but ... 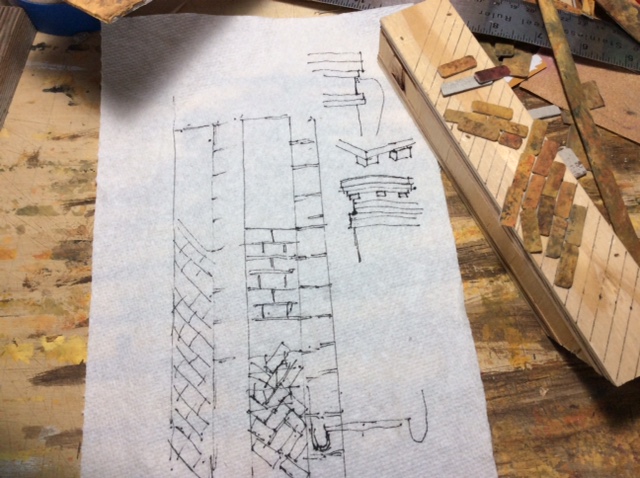 decided on a much simpler pattern mainly because the bricks did not fit properly without cutting into the patterns. On the left of the picture below you can see the prepainted egg carton. It did not look very promising but when they were cut I was very excited about the effect. 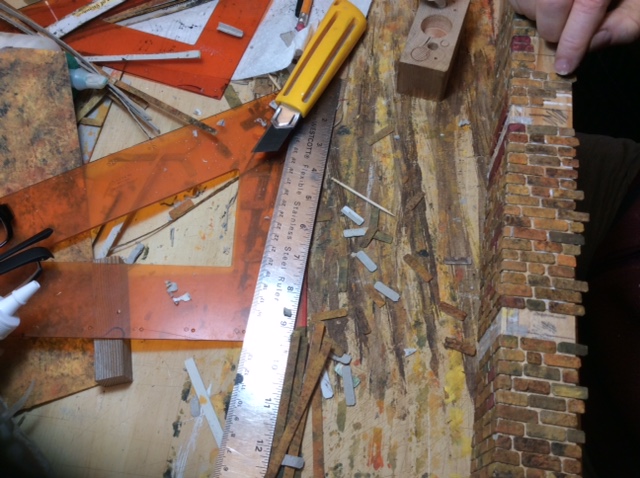 This was the result. It was a mix that looked authentic but once on the house we could see the terracotta tones did not compliment the red doors. 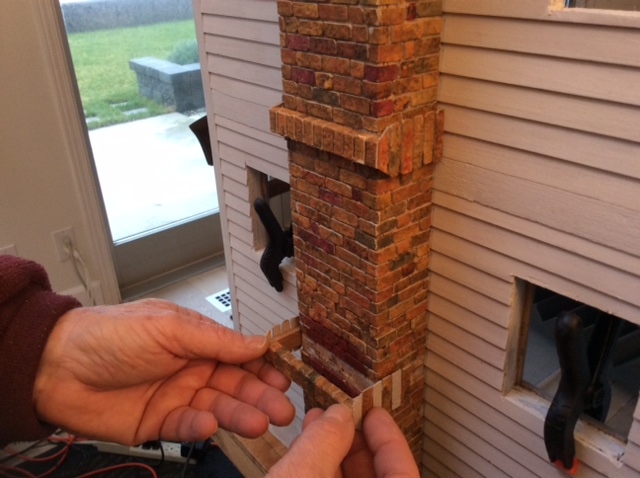 I liked the result of mixing several colours and splattering some before cutting and mixing them up to create a random brick colour. I realize the colour softens when mortar is applied. 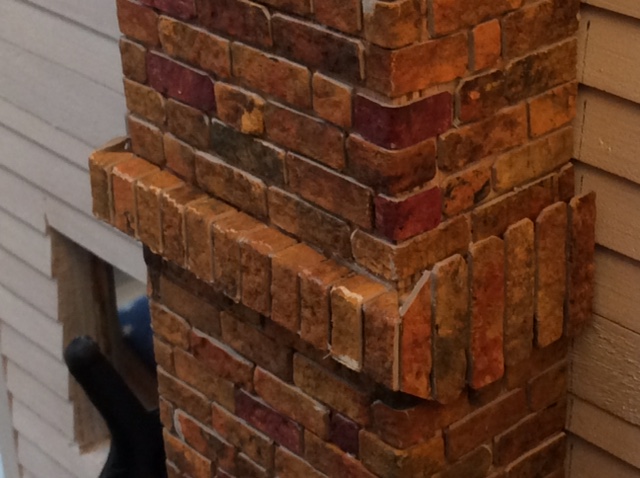 But no, not the look we wanted for this renovation. Our new colour choice shown below is Craft Smart acrylic "French Wine".  It did look harsh in its entirety but once grouted with tinted spackle it mellowed and we are very happy with the result. 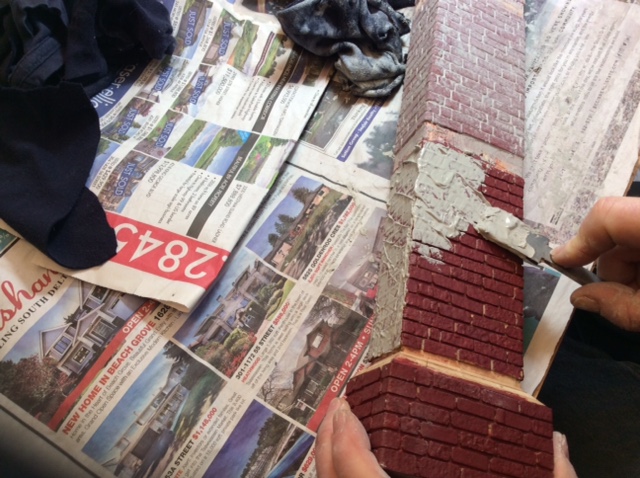 You can see below we did a small sample before we did the whole chimney to check the final result.
There will be some aging to do before we consider it complete but for now we can move on. 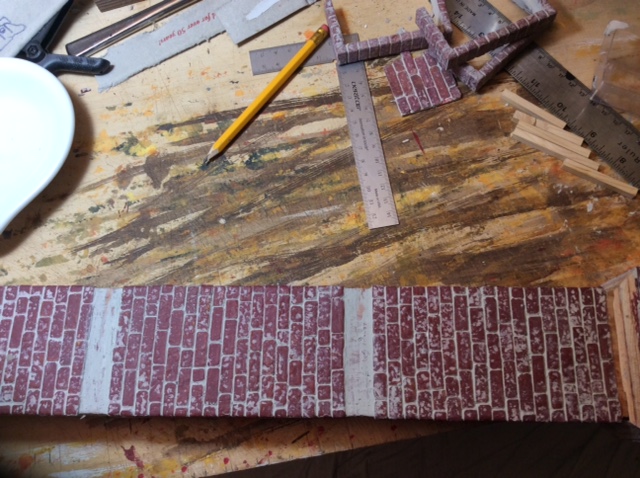 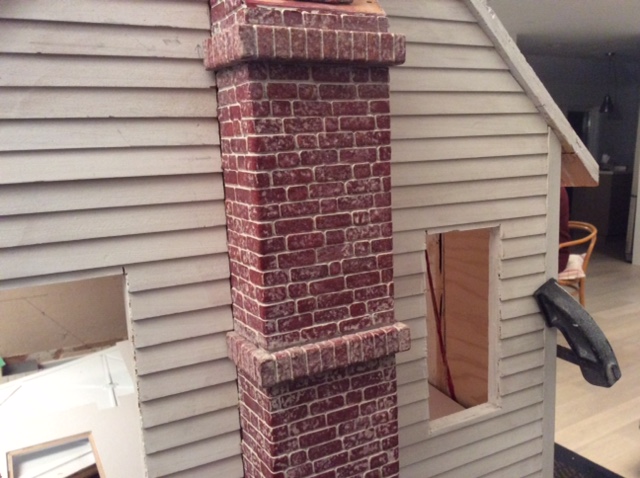 The extension is still held on with a clamp.  The chimney is attached with earth magnets for easy access to wiring which feeds from the attic down to the power supply. 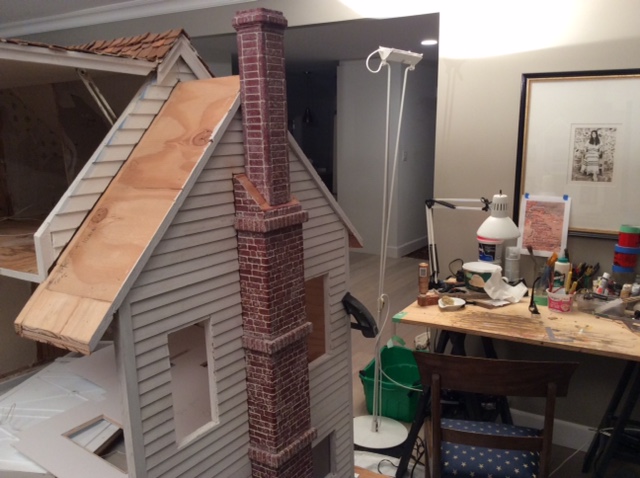 You can see images of these stoves online. They can be very decorative. B has made it very plain as it is in the bedroom. I have laid out the components to give you an idea of how it was made. Firstly a cardboard tube which is made larger with an extra layer at the bottom. Flexible tiles (Elizabeth made me take these from her some time ago), glued around the cylinder create the basic stove shape.

The decorative element on the base is part of a plastic princess crown from the dollar store. The metal crown is part of an old light fixture rescued from one I found on the road.
The granddaughters used it as a crown but as they are now "so over" the Princess thing I decided it was safe to cut it up. 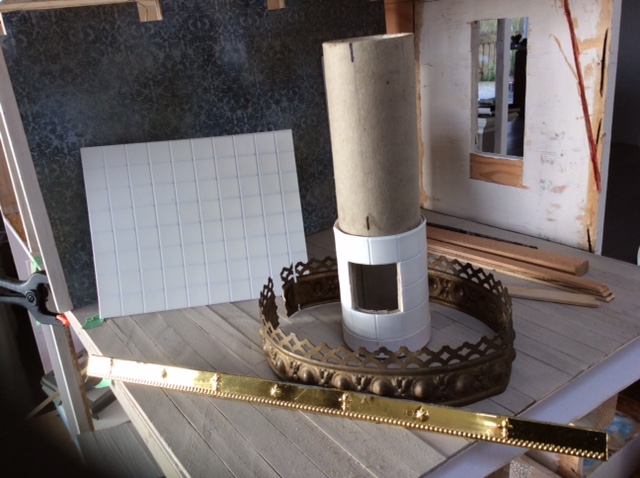 Plastic heated and bent and glued for the base. 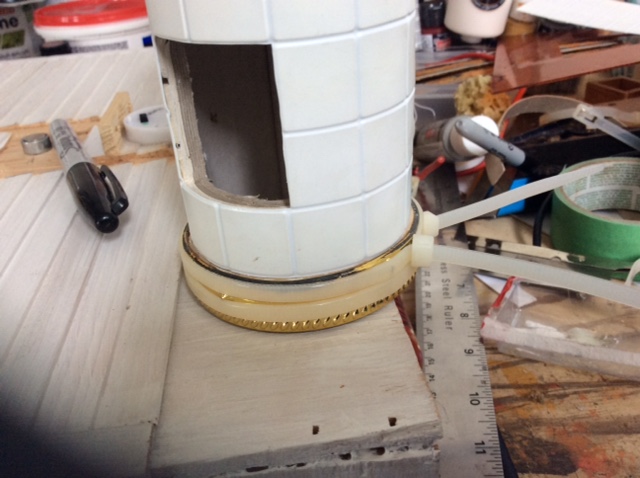 Tiles now glued in place, black rubber seal for transition between bottom and top. This rubber seal has been a difficult thing to paint as the paint just seems to slide off. 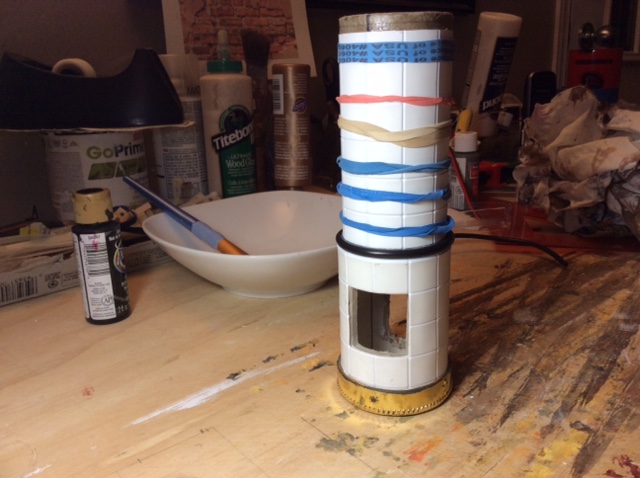 Of course I had to check it out to see if the light would cast a glow inside the stove. 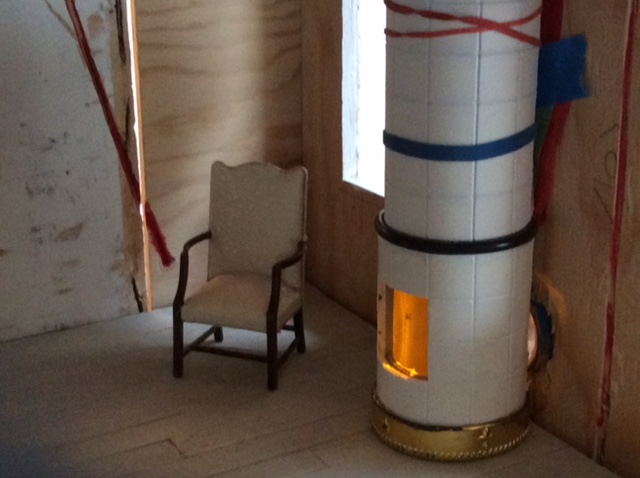 Bruce preferred to play with fire and scorched some wood for the stove.  Boys will be boys... 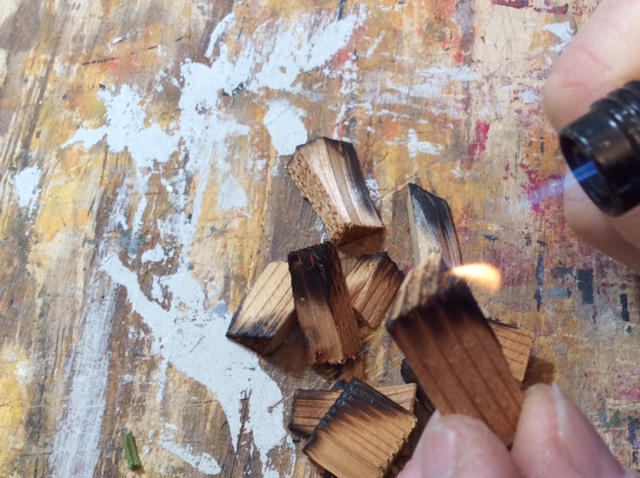 Grandchildren always like to get into the act..... hide the blow torch! 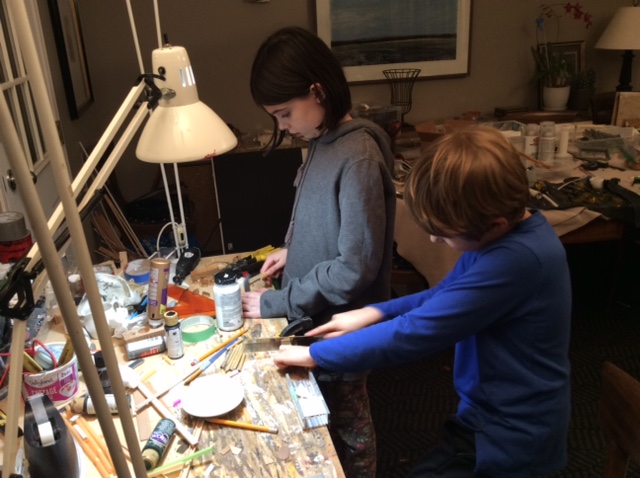 Extension:  At last the extension has been attached, roofing and gutters also. The siding is being glued. 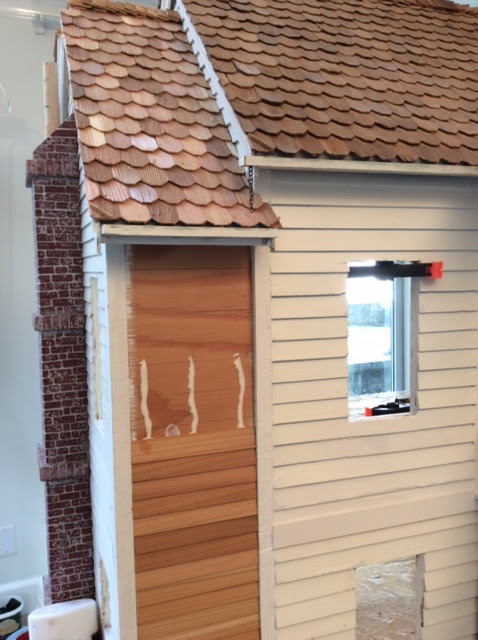 Siding has been completed and chimney in place. 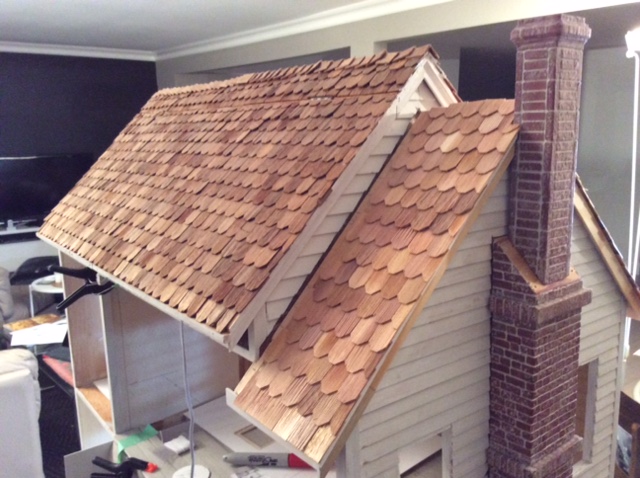 It is sometimes difficult to know what to attack next. but we decided to make slate tiles for the winter room floor and the landing.

Once again we used dry-wall spackle on card for texture and painted it our colour of choice.  The tiles have been grouted for the interior of the winter room but not for out-of-doors. 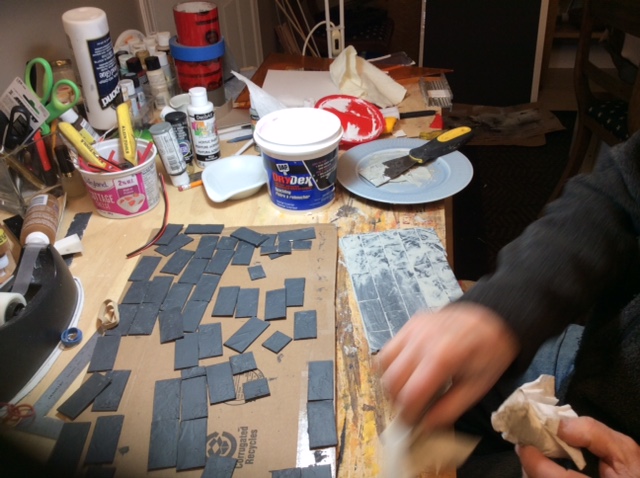 Texture of tiles. This is very easy to do - of course you need to paint the edges too. 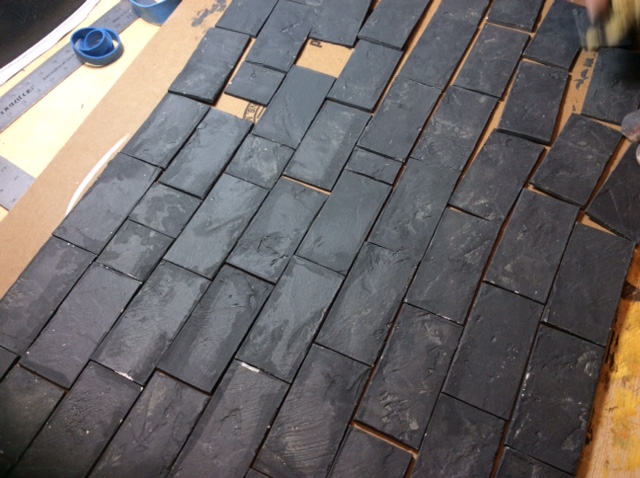 Bedroom:
The floor has been glued down as have the ceiling rafters. Where the white and blue panel finishes near the red doors there will be a door and wall for the bedroom. The circle on the right side near the window is the light for the interior of the kakelugn stove. On the left is the stairwell. 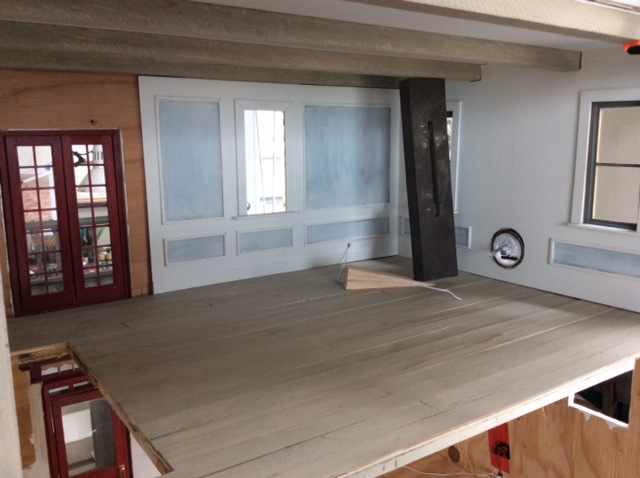 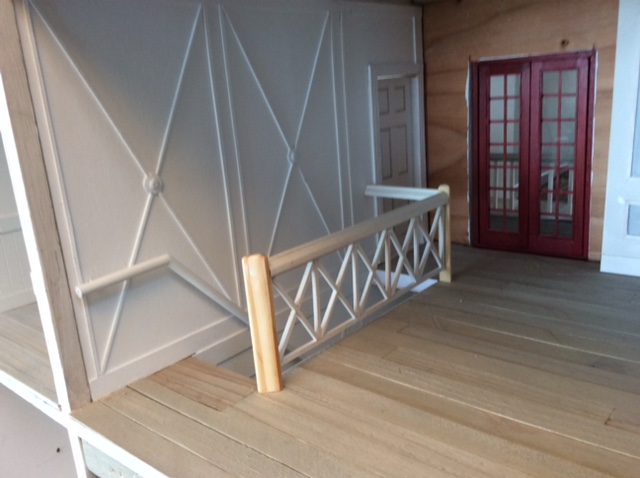 Now they have proven that they fit they will be painted but not glued into place until the rest of the walls and lighting has been installed. 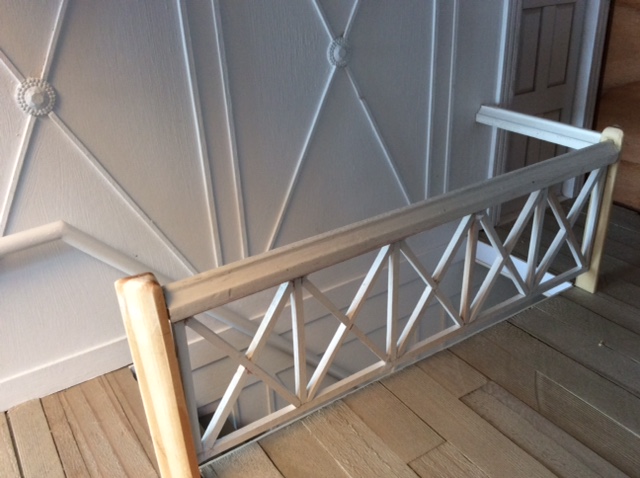 The winter room is attached, the slate paving installed as are the downpipes on the gutters. The red steps lead inside. They are detachable using earth magnets again to make the building less cumbersome to move.

And so ends this epic of the renovations to the now called Swedish House. I am not sure when it will be finished and we can reclaim our living/dining room. We have had so many luncheon and dinner gatherings sitting around our coffee table instead of the dining table - people are beginning to wonder if we will ever finish. 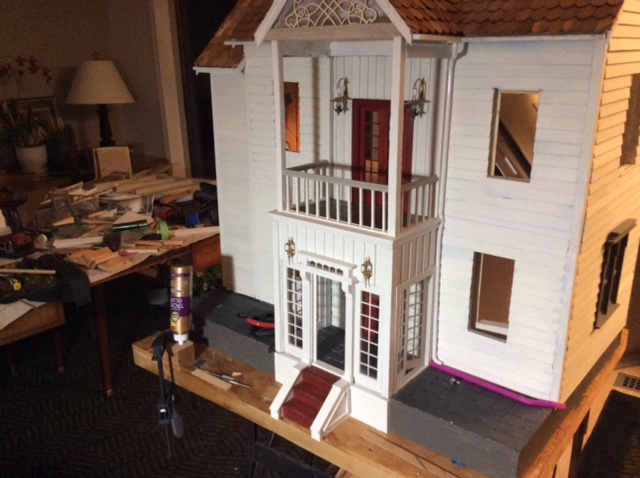 In Vancouver the snowdrops are up and daffodils are nodding their unfurled heads. However tonight snow is predicted. On Thursday the Miniteers are gathering for a day together. I am looking forward to that!

All the best everyone .... keep on mini ing.
regards Janine
Posted by minwks at 4:45 PM