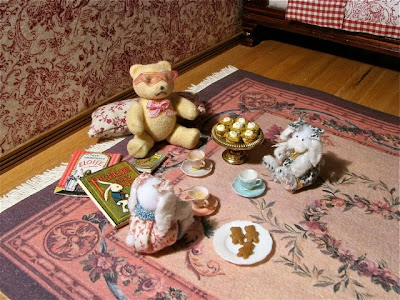 Senior bear requires glasses to read the Children's books made using pictures clipped from magazines. I will paint the frames of the glasses black at a later date but for now I have a small supervisor who believes that if it is pink all is well with the world.
I made the bunnies and painted the Crysonbon cups and saucers. I like the scale. They are plastic and come attached to a bar from which you detach them.... but paint them prior to detaching them. Probably everyone does it this way but the first time I bought them I had them off the bar before I realized the advantages of leaving them on. Their cutlery is also a good scale.
I bought the rug many years ago and would like to enlarge and reproduce it to tie the beds together.

Elizabeth made the lemon tarts and stand and showed me how to make the bunnies. There is a plate of three gingerbread bears. Notice how nicely the pillows on the bed slump when they are filled with gravel.

If you did not see the first post of AtticBedroom you can find it in April dated April 8. I had begun writing in April but only posted it last week. However, the blog posted it in April. Not sure how to change that. Any advice? 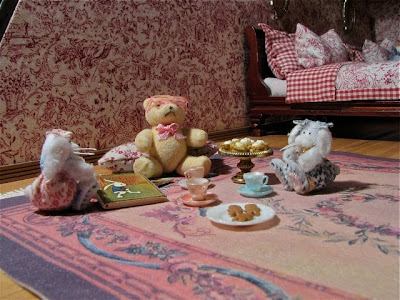