I do have a habit of buying something and then not unwrapping it for some time. I usually feel that things have to make their way gently into their new space. Not this time. I arrived home from the Seattle Show and next morning my Granddaughter and I found places for all but one purchase.

Fatima bought me this delicate doll from Bobbi Johnson, she has a porcelain face and arms.  I thought she would go into the children's room but Granddaughter #1 correctly decided she should be in the Empire Room. 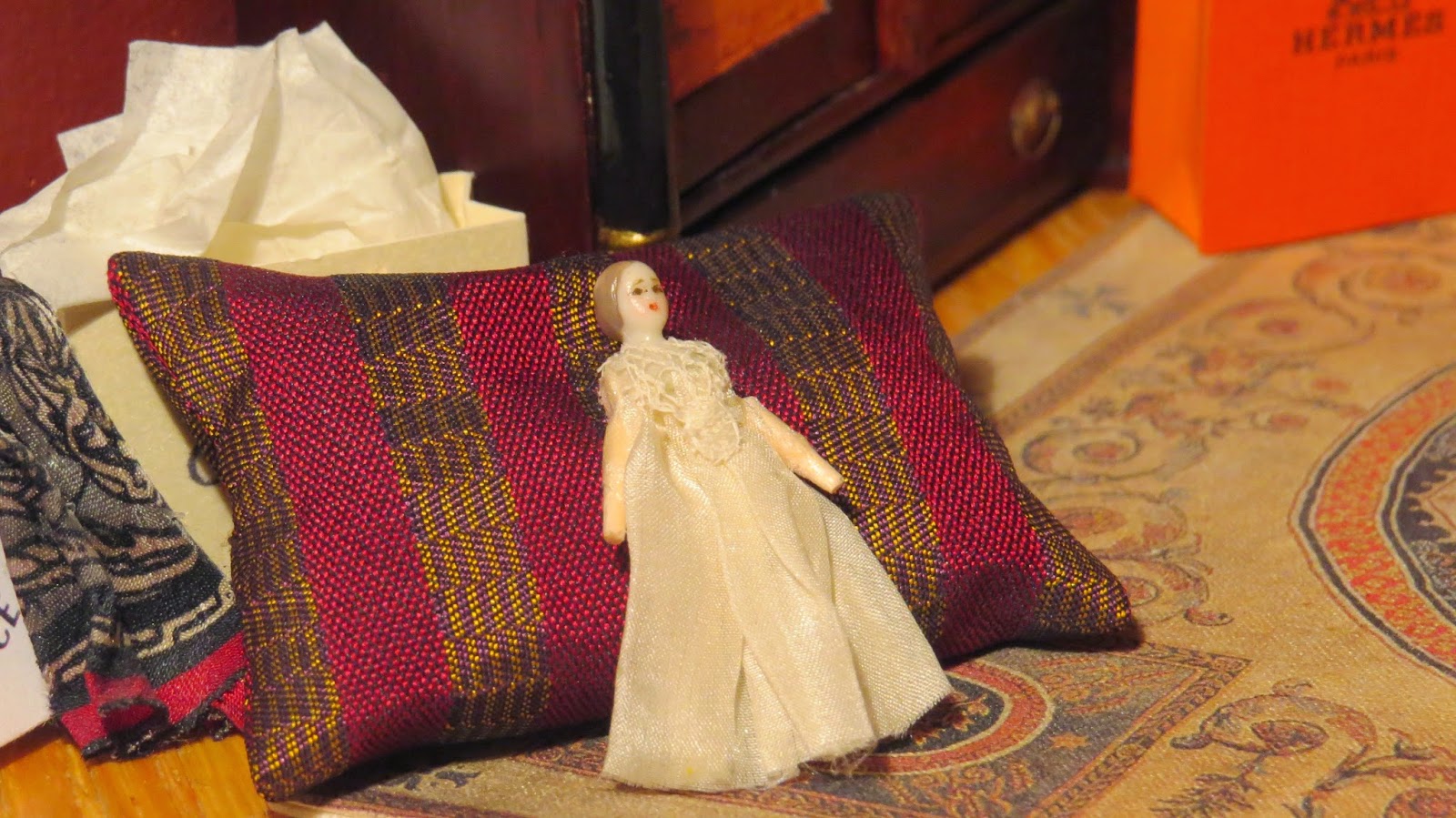 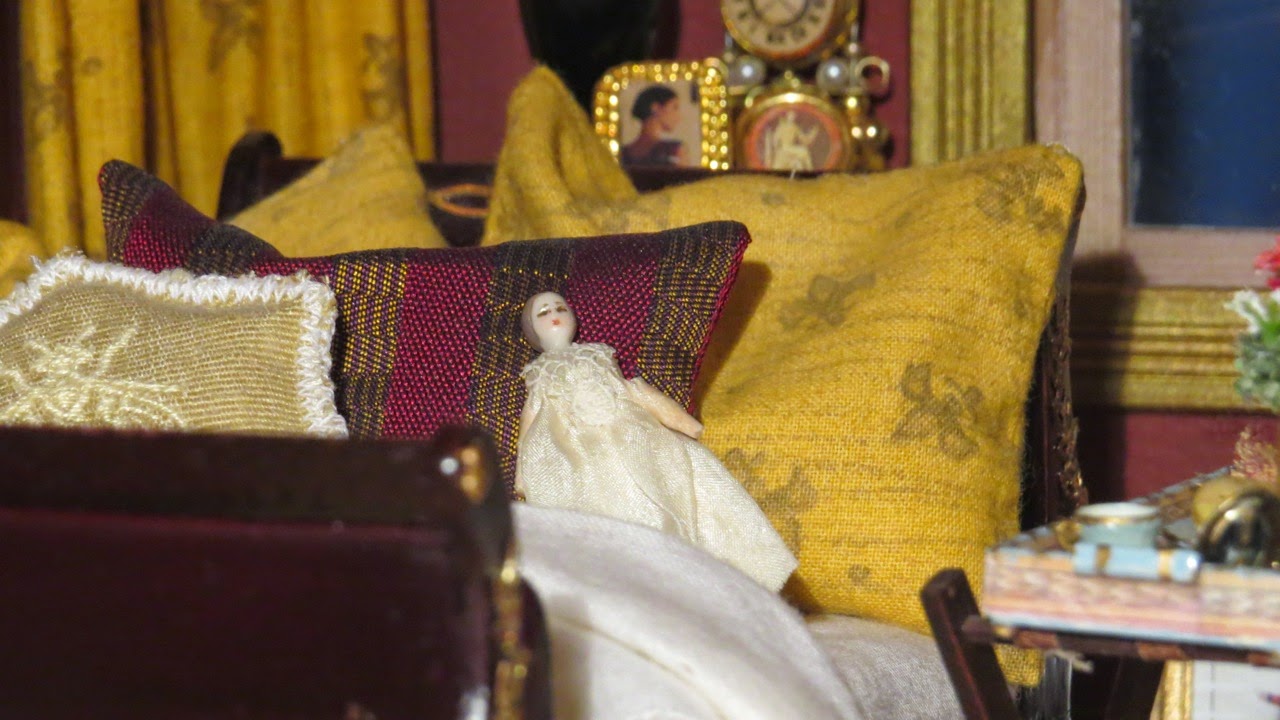 The fire has burned down to its embers. Cleo, the cat, is checking the remnants of a midnight picnic - did that naughty cat knock over the glass? The electricity magically began to work so I was able to put a fire into the fireplace. This was done by using the base of Orange TicTac's with a light bulb placed into a hole drilled into the back of the box. This was then painted and cellophane paper crushed to create more of a glow. Elizabeth at http://www.studioeminiatures.blogspot.ca bought our attention to this technique when she created her fireplace in her living room. 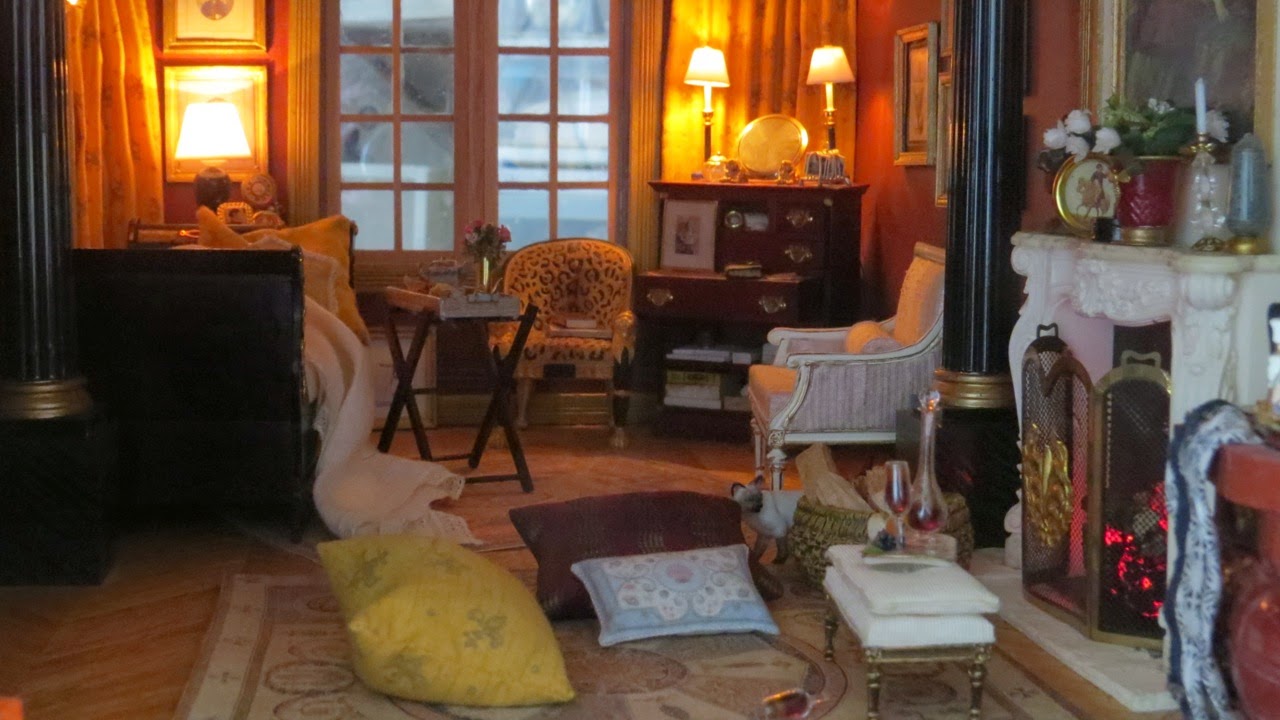 Sometimes a small project takes more time than expected.  Does that sound familiar? It was not difficult to chop the wood for the basket but at each chop the piece would go flying off, never to be found again.  Wine glasses and decanter on tray by Janet Uyetake. 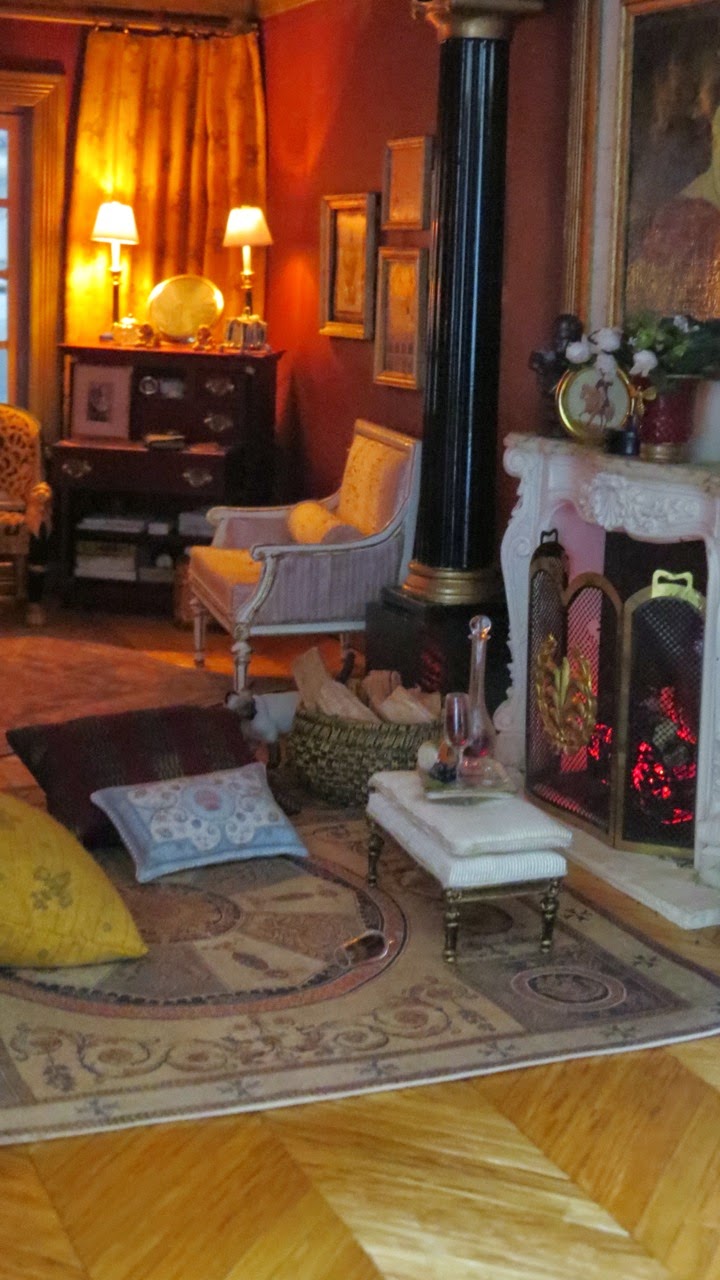 I did tell you about the single pea and other veggies that I bought from  TwinHeart minis. It is difficult to get a photo but I hope you can see the fully formed peas nestled inside the pod. The parsnip has gone missing.  I cannot remember if I put it somewhere to keep safe, obviously I will have to defer vacuuming until it is found. 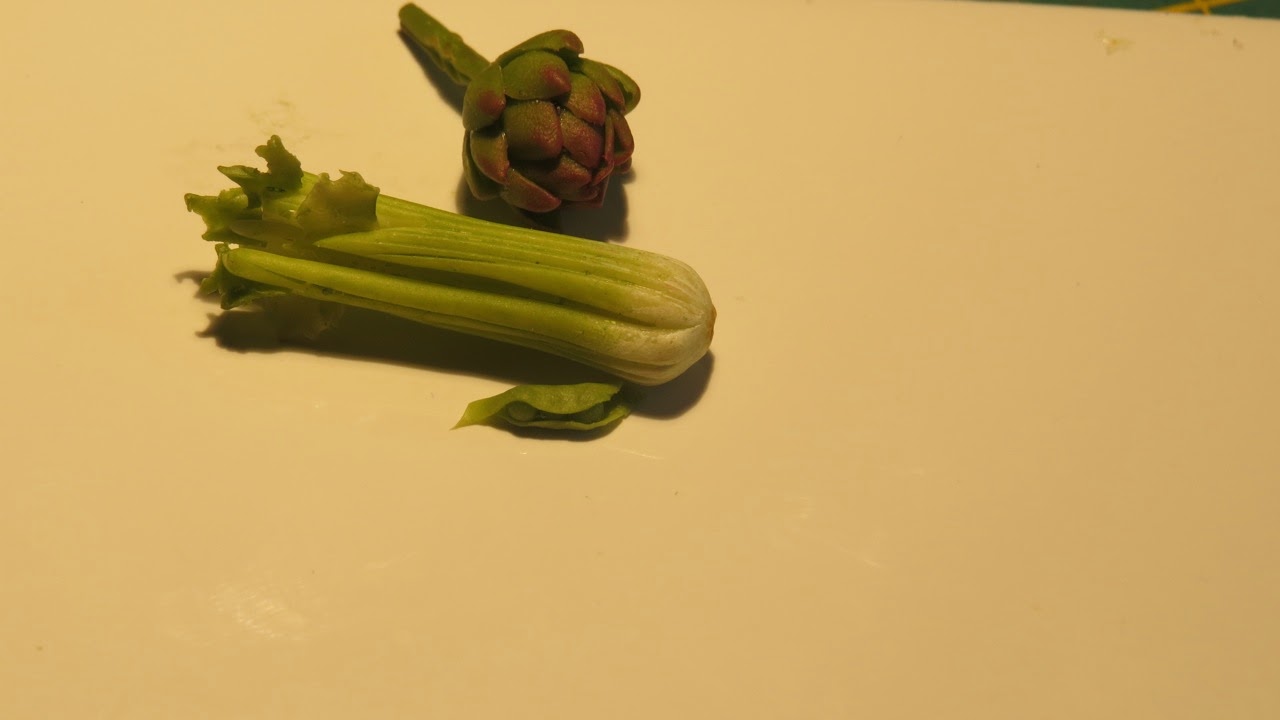 The final photo is of a gift of a planter from Elizabeth.  Is it a hint to get on with my perimeter garden ... perhaps ...
A grotesque keeps vigil over a broken pot while the little plant bravely blooms on.  If you look closely at Elizabeth's current post you will see this very pot. The grotesque was found many years ago, a topper for a dollar store stamp.  It takes so long to go anywhere! I have to look closely at everything to see if there is any possibility of a miniature treasure. 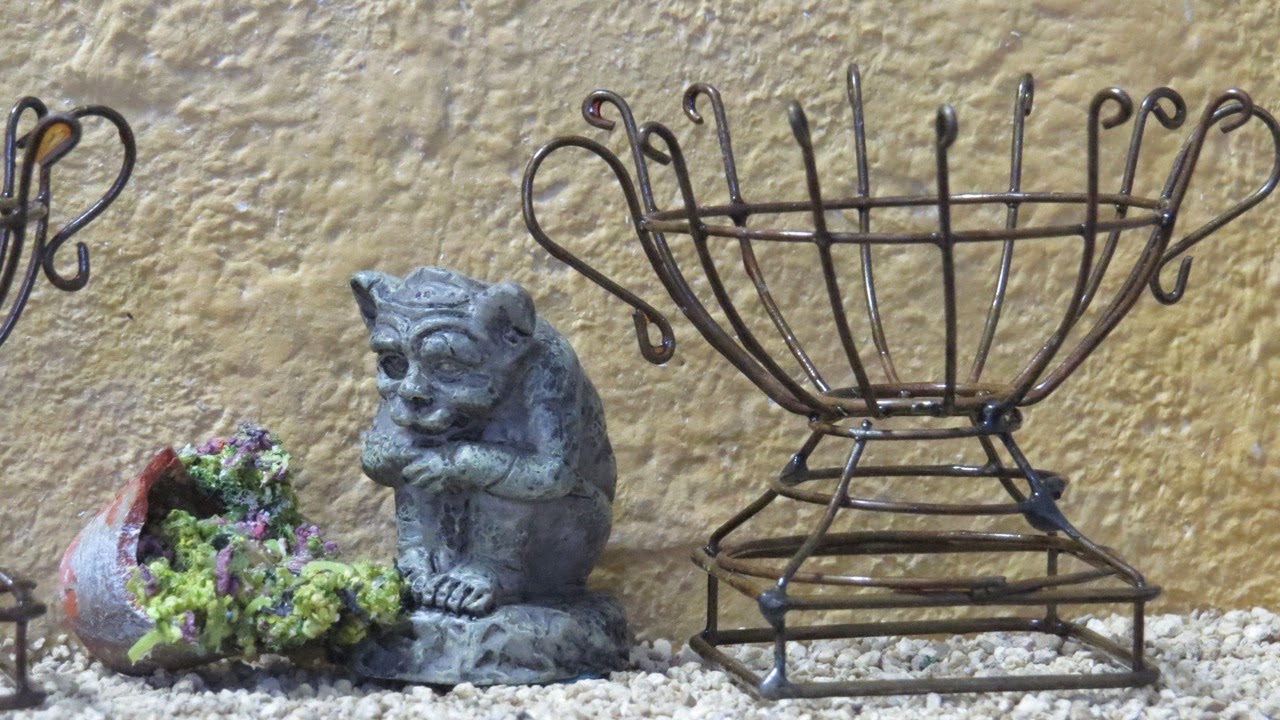 All will be quiet on this blog for a while. Think of me as I spend long evenings hovering over the computer searching for specific book title covers to reduce for the salon library wall. Who knows when I may emerge.